How did Terri’s introspective trip in the Lighthouse help her face her fears and boost her creativity? Read her heartfelt story and watch her interview to find out. “Decluttering my heart from obsolete negativism has left quite a bit of room for other much more enjoyable things into my daily life.” — Terri Maxfield lipp

When I had my first psychedelic experience at the age of 18, it was a decidedly rebellious, blind jump into the kind of life I thought I wanted to lead. It felt like an audacious, rainbow-patterned path to the heart of some counter-culture, anti-establishment, bohemian way of life that called to me through music, books, and films. I never imagined that decades later I would be experiencing those same psychedelics, legally, while lying on the floor of a repurposed church on the western coast of the Netherlands. But much to my delight and surprise, that is exactly what happened.

The years leading up to that event were filled with unplanned adventures and silly, reckless behavior which I thought was a lot of fun at the time. However, in retrospect, it was really not so much fun as it was a self-destructive form of escapism. Some rather unpleasant occurrences in my childhood left me with a few noticeable dents in how I viewed and valued myself. Over the years however, I was able to pull myself together to a fair degree and eventually found myself working as a full-time artist and, to my amazement, happily married.

Despite these positive improvements though, I still found myself struggling with negative self image and sense of worth. Then recently, while on holiday in Amsterdam, I heard about legal, guided psilocybin retreats in the Netherlands that were focused on transformative healing and self-care. Intrigued, I started looking around online for what kinds of retreats might be available. The moment I ran across the website for Synthesis, I knew I’d found what I was looking for.

The website immediately drew me in and I was captivated by what Synthesis had to offer. Sensitive, well thought-out retreats held in a gorgeous venue, with professional, highly-skilled facilitators. There was a level of professionalism that instantly appealed to me and I felt I could trust this organization to be exactly who and what they presented themselves to be.

Signing up to attend one of their retreats was easy, and reassuring. All of my many questions and concerns were answered quickly and sincerely. The honest, personal attention I received was extremely comforting, because although I was really excited to go, I did feel slightly overwhelmed by the thought of traveling alone to a place that looked great online but might not be so wonderful in person. After all, I was going to a place I’ve never been, to take a high dose of psychedelics, with a bunch of people I didn’t know. The thought of allowing myself to be so vulnerable around strangers was a tad bit unnerving. However, between the availability of the people at Synthesis to address any and all queries, along with the very thorough preparatory information they provided, any qualms I had were promptly dismissed and I was soon on my way.

Once I arrived in Amsterdam, the attention to detail (that I feel is a hallmark of the entire Synthesis experience) continued uninterrupted. All participants were provided with comfortable transportation to the venue, a beautiful apartment which was tastefully supplied with everything a guest could need, lovingly prepared and delicious vegetarian meals, 1-on-1 conversations with their own personal facilitator, and more. The venue itself, lovingly referred to as The Lighthouse, reflected a thoughtful and detailed, artistic vision that set the tone for my entire stay. The design is a post-minimalist masterpiece, undeniably modern, yet magically warm and welcoming with an enchanting hint of “otherworldliness.” For the visual artist in me, it is a heavenly slice of perfection. 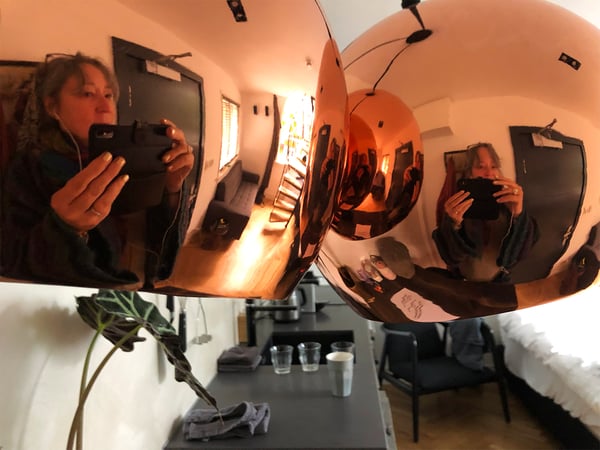 “The Lighthouse reflected a thoughtful and detailed, artistic vision that set the tone for my entire stay” - Terri Maxfield Lipp at Synthesis Retreat

It was in this ambrosial environment that I experienced something quite unexpected. My solo psychedelic explorations had basically always been very light and love-filled ventures, leaving me feeling tenderly embraced by the universe. The journey I embarked on here however, took me to the other end of the spectrum, to a darker place, and for this, I am eternally grateful to Synthesis.

There have been so many things that I had denied and avoided for the majority of my adult life - thoughts, feelings, memories and fears. That day at Synthesis, during my psychedelic voyage, I saw a harbinger of those challenges fluttering around the edges of the rainbows I was so happily admiring. I then thought to myself, “Well, I can shoo away these darker thoughts like I’ve always done. Or, if I was ever going to explore that whole thing, this might just be the best place to do it.”

As it turned out, it was the perfect place to do it. Trusting in the safety net of the facilitators, I was able to let go entirely and plunge headfirst into all the emptiness, fear, and sorrow I had boxed-up for so long. I was able to acknowledge and face things that, left to my own devices, I am not sure I could ever have been able to handle on my own. Case in point, when I began to feel completely lost in a pitch-black solitude that I found at the bottom of all those emotions I had been rummaging through, I suddenly felt a very gentle presence - a faint, warm ray of light calmly showing me the way. I was able to turn around and follow that light back to the ceremony room to find one of the facilitators had placed her hand on my shoulder, very gently. That one simple, yet profoundly empathetic, gesture provided me with exactly what I needed in an unobtrusive, dispassionate way.

The rest of that day I felt truly listened to as I tried to make sense of what had just happened. I was free to talk as little or as much as I needed to. The people at Synthesis did not just take care of my physical being, but they took very good care of my state of mind as well. That afternoon I fully understood why the word “guide” is so often used for those who accompany psychedelic travelers. I did feel respectfully guided from time to time, but not once did I feel “instructed” or “led.” The excursion was entirely mine.

After the retreat, I was left with a deep sense of gratitude. The ability to confront, tame and dismiss some of my old demons, is something for which I am very thankful. The follow-up and continued support of the Synthesis team were invaluable as I worked through integration, clarifying and putting into practice what I had learned. And one very important thing I learned, was that one of the benefits of that expedition into what one facilitator referred to as “sacred darkness,” was that so many day-to-day irks and frustrations were actually just amazingly inconsequential nonsense. I also realized that I am much, much stronger than I ever imagined I could be.

Facing my deepest fears was not something I had ever thought that I could actually do, much less end up being grateful for. Now that I have, I’m left feeling as if I’ve offloaded a massive weight from my mind, and I find that feeling incredibly liberating. For example, I feel much more freedom when making my art. The continual second-guessing of everything I do, the little voice that would tell me, “You’re doing it wrong,” or “You’re not a ‘real artist’,” has been quieted. It still pops up here and there, but I now have the capacity to gently tell it to go sit down and be quiet, leaving me free to explore, experiment, and create. That ability to control old programming has had an impressive effect on other aspects of my life as well, deepening communication with my husband, and allowing me to strengthen current friendships, even seek out new ones. Decluttering my heart from obsolete negativism has left quite a bit of room for other much more enjoyable things into my daily life.

Over the years, I had tried various forms of therapy to try and come to grips with the darkness I knew was holding me back, but nothing ever came close to the transformational growth that happened for me at Synthesis. It was not an easy journey that day, but in such a non-judgmental and profoundly caring environment, it was made more than bearable - it was made meaningful. I’m so happy that the hyperbole of the past is fading away and the world is finally waking up to the reality of what psychedelics like psilocybin have to offer. This old knowledge, renewed in our time and backed by scientific study, makes it possible for places like Synthesis and their beautiful Lighthouse to exist, helping seekers find their way out of darkness.